Monday, after a bit of a sleep-in, we headed downtown on the #23 double decker bus to see what was happening, which took us along the parade route that Her Majesty would follow on the way to church later on in the day.  Flags and people everywhere.  And, having rained itself silly on Sunday, the it was actually quite warm and we saw the sun a few times. 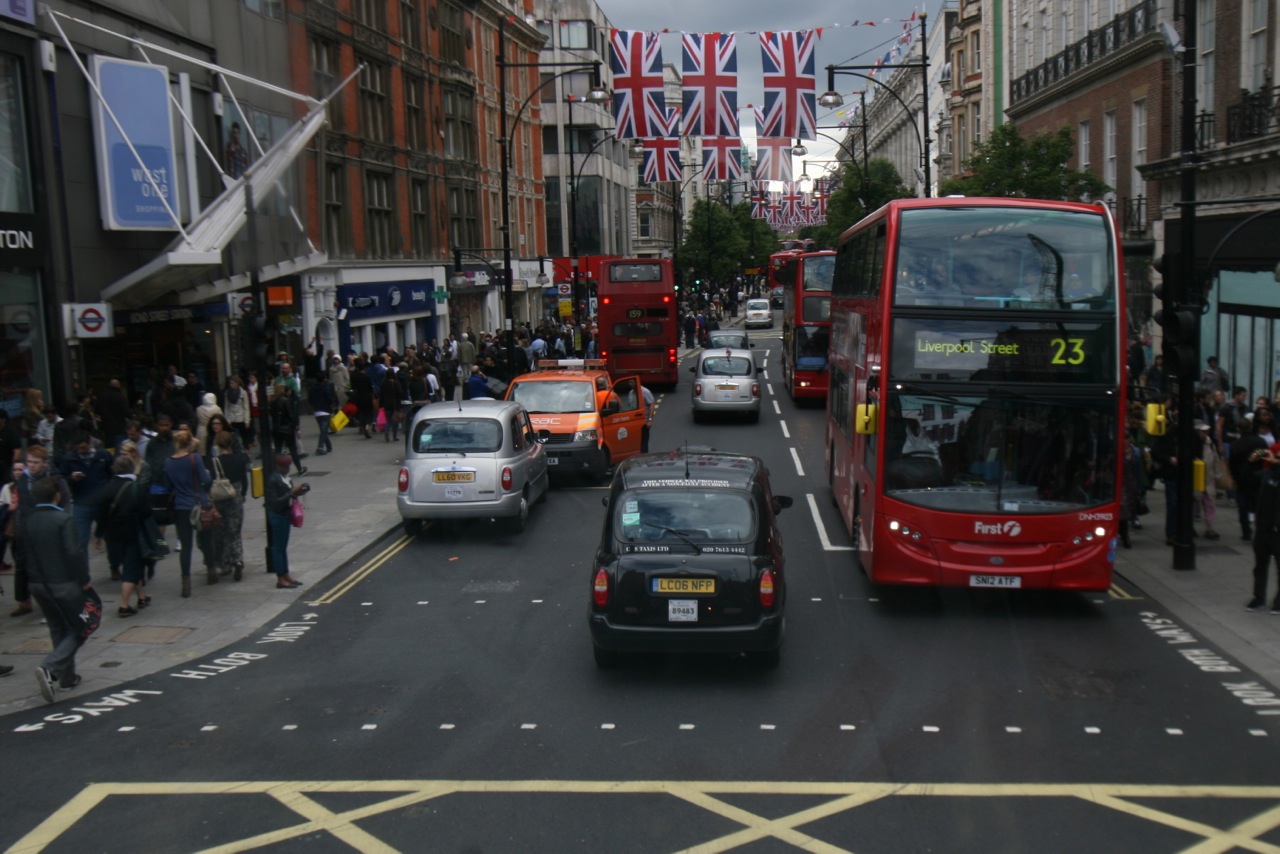 Can’t come to London without a little retail therapy on Oxford Street. By, by far the best thing that happened was running into our Maori brothers from the river.  It had been such a madhouse at the takeout that we had lost track of each other and didn’t really get a chance to say a proper goodbye.

Before going downtown, I’d spent about an hour trying to find the New Zealand team.  Chappie Harrison, the pageant captain of the wakka canoe, had said they were staying in a Hilton hotel downtown.  Turns out there are 21 Hilton hotels in central London.  No luck.  The reason for the search is that we’d had such fun and camradery on the  river that I wanted to give my ceînture fleshé to Chappie to mark this highlight of our journey down the Thames.

And there they were, or a good bunch of them, sitting on the steps of a fountain in Picadilly Circus.  Chappie had already gone back to the hotel to pack but we were able to pass on the sash to the leadership of Toi Maori Aotearoa (sitting l-r, Robert Gabel, Chairperson — Ngã Waka Federation; Senior Waka Captain Joe Conrad; and Operations Manager, Tamohou Temara) who were only too pleased to pass it on to Chappie. And we got a chance to say goodbye, agreeing that we should keep this canoe connection going. Stopped by Trafalgar Square, across from Canada House (The Canadian High Commission) as we wandered, making sure we had our bearings for returning later on in the day for the beacon lighting ceremony to which the Canada 1 team was invited.

Heading back to the Frontline Club as the afternoon waned, we got a glimpse of the infrastructure it takes to keep 10,000 people safe when they attend a concert in front of Buckingham Palace.  Here is the police and paramedic depot right behind Marble Arch. So back we came to Canada House for 8 pm and got a chance to meet some of the other Canadians involved in the flotilla as well as High Commissioner Gordon Campbell. We toasted the Queen.  We watched a bit of the star-studded concert on large screen TVs and then we sipped champagne and listened to the Canadian Tenors fill the newly renovated grand hall of Canada House with Canadian songs that added to the richly flowing emotions of the evening. And then, on cue at about ten o’clock, the High Commissioner headed up onto the roof while Heritage Minister James Moore led everyone else out into Trafalgar Square where we watched as two gas flares on the roof of Canada House were kindled. As a souvenir of the evening, the High Commissioner encouraged us to take with us our champagne flutes, which had been engraved with the Canadian Diamond Jubilee insignia.  And off we went into the throngs of a London night on a northbound #23 bus.