In the Skin of a Tree: Why Birch Bark? From time to time, The Canadian Canoe Museum uses one of its gallery workshops to explore or recreate the various canoe and kayak-building traditions reflected within its collection.  These opportunities always make for engaging interactive experiences for our guests and have also led to very rewarding collaborations with colleagues. In the end, these projects also aspire to deepen our shared understanding of the many different traditions, techniques and stories reflected within the Museum’s own remarkable collection. Among the bewildering array of methods that can be used to form materials into a watertight hull, the Museum has documented a few methods thus far, including: “wide-board and raised batten”, wood and canvas, birch bark, skin-on-frame, lapstrake, strip-plank/cloth composite, 19th century folding canvas and even inflatable! Happily, the checklist of methods yet to be tried is much longer still and the successful results of these efforts generally end up designated for use on the water as part of our fleet of program boats. If asked, I would not hesitate to say that John Stephenson’s 1879-patented Cedar Rib construction sits at the very top of my own wish list. Like witnessing a bumblebee flying about, unaware of the alleged impossibility of this feat, I’m pretty sure that the Cedar Rib canoe cannot actually be built, except on paper. And yet we have seven of these in our collection and are caring for an eighth, loaned to us from the Buckingham Collection (it had been presented to HRH Princess Elizabeth II as a wedding gift in 1948). Many hundreds were made. I recently came across upon forgotten photos of an older project, taken some years ago when we were recreating on of the iconic 12 metre/36-foot (or “six-fathom” for the fur trade nerds) birch bark canoes commonly called a Montreal Canoe or canot du maître. The objective had been to make an accurate, working rendition of the full-volume versions of these canoes – once the transport trucks of the Montreal-based fur trade before the early 19th century- and then give it a proper pounding by matching it against all of the hellish conditions and expectations of the day. That will have to be another story for now. 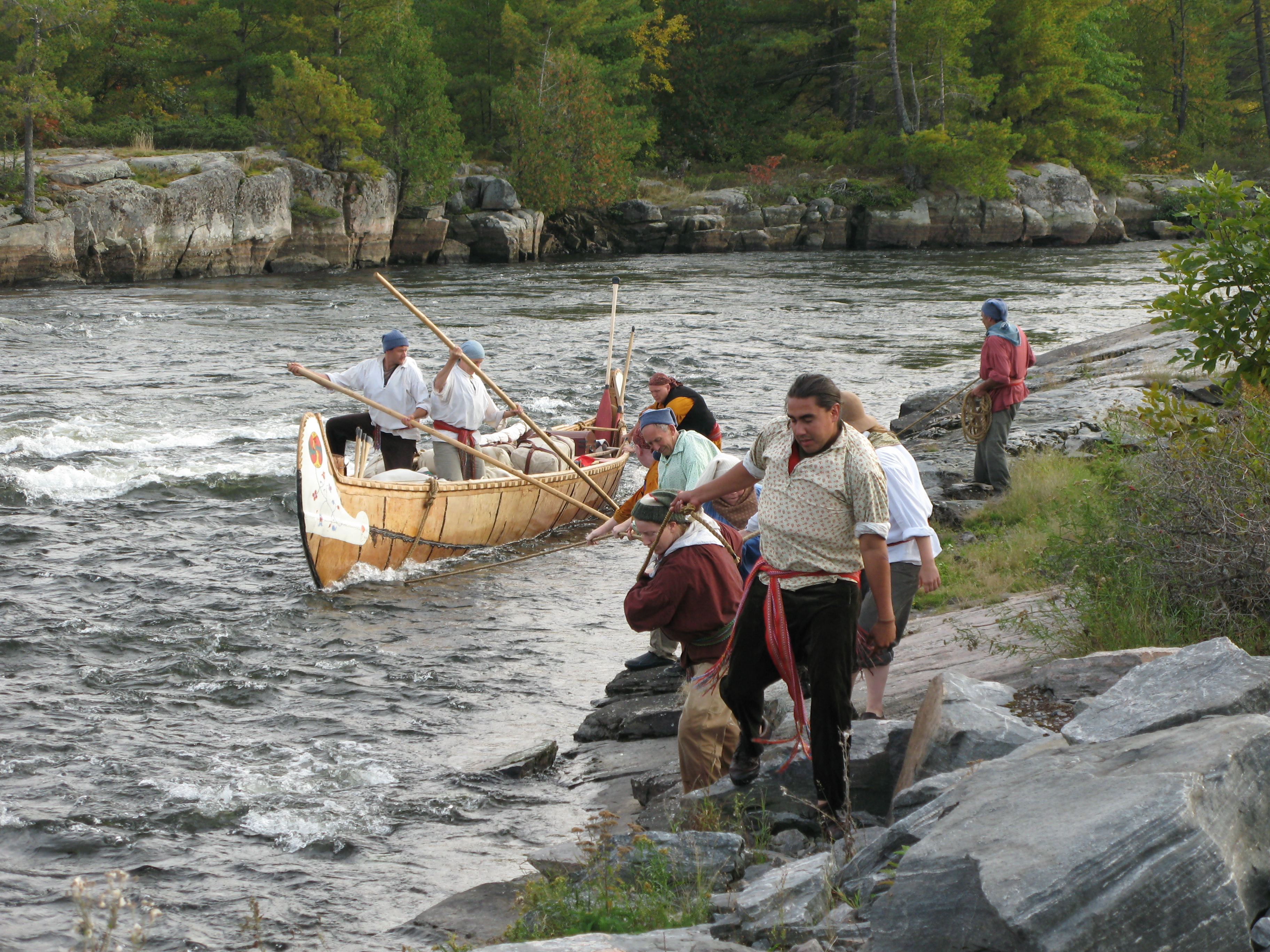 The historical and contemporary connections between the canoe and the Canadian landscape have certainly been well explored. A similarly profound connection can also be made between the white birch and the inland maritime cultures that thrived across the Canadian Shield for centuries. The availability of birch bark, the need for portable boats and an impassable landscape that is yet also ideal for small boat travel led to a relationship with the canoe that was unique to the upper half of North America. But why birch bark? The alignment of the fibres or grain in the outer bark of a white birch (Betula papyrifera) is the key to its suitability. Recall peeling strips off of a tree (and the disappointed faces around you) and you know that it tears and removes around the tree rather than vertically. Imagine the fractured, accumulated bark of most other trees and you’ll see deep vertical fissures that have been caused by (and allow for the growth of) the tree.  Each year a new film of birch bark forms, adding another protective layer to that skin. Since the accumulated layers of birch bark at the outer surface were formed when it was the tree was thinner, they delaminate, and fall away, maintaining a relatively thin, lightweight rind even in a large tree’s dotage. There is great inconsistency in the adhesion of these layers and care is needed in selecting the right tree. Birch bark canoes are assembled from the outside in, beginning with the careful tailoring of a bark envelope for the intended canoe. Fresh birch bark can be flexed but it has no stretch and must be slit at intervals (in line with the grain of the bark to allow for its curved, tapering shape). Otherwise the surface of the canoe would resemble a pleated cupcake wrapper. Once shaped and tensioned by its internal framework of ribs and sheathing, this tailored skin would split under the strain if the grain were aligned longitudinally, as with most tree barks. The Montreal Canoe project was a glutton for materials and it took great sheets from nine mature trees, all slated for licensed harvest, to complete the boat. Finding large diameter trees seems to be becoming more difficult, not only on account of logging pressures today. The two largest and best sheets made up the length of the bottom of the boat. The remaining bark was sewn in as side panels using watap (split coniferous tree roots) to make the full circumference. Almost a kilometer of root was required for the canoe. Since birch bark is removed most easily in the early summer and the trees were not to be logged until the fall, they were skinned while standing to avoid spoiling the lumber. It was of course acknowledged that this process would ultimately kill the tree provided nothing else did first. Having assessed the thickness and qualities of the tree’s bark, the bark covering is slit vertically and gradually eased open, repeatedly climbing up and down the ladder to do so. It might take ten minutes to complete the task. Now imagine the sensation of being on a ladder eight metres up, leaning against the slippery trunk of a tree and swaying with it in the breeze, the bark clutched in one hand, as you begin the slow descent whilst a helper walks out with the lower end to prevent the bark collapsing upon itself.

Reflecting upon the fate of this magnificent tree, only just beginning another season of growth, you also can’t help but consider how precious and vital this material has been for centuries of life within much of the Canadian landscape.